Philip K. Dick’s story “Autofac,” published in Galaxy in 1955, describes a post-war world in which the entire population is dependent on an automatic factory for its consumer goods, including synthetic milk (real milk had disappeared from the world along with cattle). The human survivors of the cataclysmic conflict developed a desire for independence, mostly because the automatic factories rapidly consumed the earth’s resources in preparation for war. The Autofacs were originally established by humans to provide the labor for the war effort. As in wartime, most of the resources remained applied to the military. Most troubling, the original programmers, created the automatic factories to continue the war effort, and the consumption of resources, without direct human oversight, in an effort to ensure victory even in the face of ultimate destruction. As the plot unfolds, survivors try using complaints and final sabotage to destroy the Autofac and salvage a hope for human survival. Unfortunately, the automatic factories were also programmed to be self-repairing. Human dependency on the robots is ensured, as is the consumption of every last natural resource, and the annihilation of the remainder of humanity. In this story, Dick sums up his central fear of technology, that once created it has the power to control the lives of its creators.

In The Zap Gun, this technological problematic is studied after a solution of sorts is worked out.  The overproduction of military weaponry, the need for consumer goods for social control, and Cold War anxieties intersect in this novel.  It is not one of his major works.  Philip K. Dick called it “totally unintelligible” and a “turkey.”  He completely ignores it in his Exegesis.  So in The Zap Gun, the Cold War has died down.  Neither side is really interested in destroying the other anymore.  Both agree that would be catastrophic.  However, the facade of the conflict remains politically powerful at home for both sides.  One character even mentions Orwell when pondering how unnecessary is real war.  Both sides still maintain their secret police and espionage apparatus, of course.   Weapon systems of mass destruction are created.  Entire bands of scientists are devoted to the trouble of how to create the most destructive weapon.  However, these weapons are never really produced, except as goods for the consumer economy.  (One wonders if this is what happened to Saddam Hussein’s weapons of mass destruction.)  The planned obsolescence of military technology is morphed into the planned obsolescence of consumer goods.  This creates less potential and real destruction of the economy, keeps up the facade of the Cold war, allows citizens to participate in that war as consumers of toy weapons, and gives an important job to the technocracy.  Here, however, the technocracy is really working at a strange psychic level pulling their ideas from popular culture.  This makes the weapons that are developed very science-fictiony.  Quite an elegant solution to the problem faced by the late Soviet Union that was over-investing in weapons of war and failing to meet the consumer needs of the citizens but only possible once both sides agree on the futility of war and the arms race. 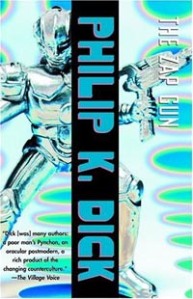 Many of the weapons are quite imaginative.  Dick seems to have predicted drone strikes.  “And needle-eyeification was the fundemtnal direction which weapons had been taking for a near-half-century.  It meant, simply, weapons with the mos precise effect conceivable.  In theory, it was possible to imagine a weapon–as yet inbuilt, probably untranced of by Mr. Lars himself, still–that would slay one given individual at a given instant at a given intersection in one particular given city in Peep-East, Wes-bloc; what difference did it make?  The important thing would be the existence of the weapon itself.  The perfect weapon.”

In the world of The Zap Gun, technology is the solution to any possible problem.  Although here, technology exists almost exclusively as toys.  “I was Klug’s contention that the world needs toys.  This was his answer to whatever riddle the serious members of society confronted themselves with: poverty, deranged sex-crimes, senility, altered genes from over-exposure to radiation. . . you name the problem and Klug opened his enormous sample-case and hauled out the solution.  Lars had heard the toymaker expound on this on several occasions: life itself was unendurable and hence had to be ameliorated.  As a thing-in-itself it could not actually be lived.  There has to be some way out.  Mental, moral, and physical hygiene demanded it.”  This is not a bad idea.  I am not convinced Klug is wrong here. Even rejecting the postscarcity prediction that all labor will be eventually play, we can see that more work is not the solution to many of our social problems.  The work ethic has been tried for centuries and our dilemma is only growing.  Perhaps a greater focus on play and more toys is what we need. 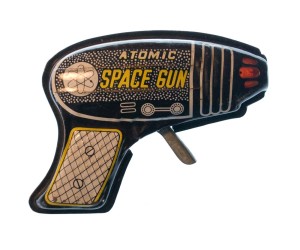 The world is unprepared for an alien invasion, lacking any functional weapons.  And, the main character seems miserable since his work (weapons development) is without meaning.  As far as dystopias go, this one is not bad.  The worst people face is some inane consumerism, but that has been shown in many of Dick’s short stories to be not nearly as bad as technology invested in war (“Sales Pitch,” “Nanny,” “Foster, Your Dead,” and “Service Call”).

2 responses to ““The Zap Gun” and Technology”