I suppose on the surface, there is nothing wrong with using fiction to document a deteriorating mental state.  The interesting thing about VALIS is that Dick is exploring his own mental state.  He seems to be aware that he was going around the bend.  Having worked on his Exegesis for a while after his hallucinogenic experiences.  I am not very expert in theology or feel comfortable talking about Dick’s contribution to theology.  Mostly because I am interested in Philip K. Dick’s investigation of late capitalism and liquid modernity, I am hesitant to take on his theological explorations.  I do think that it is true that one response, not fully irrational, to liquid modernity is a turn toward religion, even religious fundamentalism.  To his credit, Dick turns toward the religious without losing some grounding in reason.  VALIS is an attempt at a fairly worldly explanation of his religious turn.  Those attracted to fundamentalism appreciate its solid claims of truth at a time when even science seems full of uncertainty (this is seems to me is a false impression and reflective of many people’s poor knowledge about how science works). 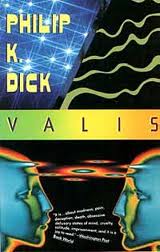 This interview shows Dick discussing some of his late philosophy.  It is worth looking at.

Since it is so autobiographical – even including passages from his exegesis – I am unable to find the value of of VALIS outside of an understanding of Dick himself, in his later years.  It perhaps should be read as a philosophical and religious autobiography.

One question he asks throughout is how can one differentiate between insanity and a religious experience.  Those of us lacking religious experiences tend to assume that those who have them are suffering some sort of mental illness.  Dick, who had spent 20 years writing about changing realities, was acutely aware that his own hallucinations could have had naturalistic explanations.  Even if few of them were grounded in science, all of his fictional delusions were scientifically explicable considering the rules of his fictional universe (a drug, a computer simulation, a fraud created by a governing body).    Take this paragraph: “On the other hand, I am not denying that Fat [PKD] was totally wacked out.  He began to decline with Gloria phoned him and he continued to decline forever and ever.  Unlike Sherri and her cancer, Fat experienced no remission.  Encountering God was not a remission.  But probably it wasn’t a worsening, despite Kevin’s cynical views.  You cannot say that an encounter with God is to mental illness what death is to cancer, the logical outcome of a deteriorating illness process.  The technical term – theological technical term, not psychiatric – is theophany.  A theophany consists of self-disclosure by the divine.  It does not consist of something the percipient does; it consists of something the divine – the God or gods, the high power – does.”

The first half of VALIS looks at Horselover Fat (PKD) and his attempts to understand this theophany, essentially a revelation.  Later, he sees a movie VALIS, (Short for Vast Artificial Living Intelligence System) which, like the novel in a novel of A Man in the High Castle presented an alternative reality that might actually hold the truth to existing reality that is being covered up.  It is not quite clear who is doing the covering up, but the revelations come from a satellite orbiting the Earth, delivering messages to select individuals on Earth.  This is the naturalistic explanation for religious experiences, particularly those of prophets.  It is not an unclever idea and would have made a good short story.  Unfortunately for the reader, we have to shift through an entire novel of theological speculation, soul-searching, and wild claims to get at the point.

The idea is useless to us trying to navigate really existing late capitalism.  God may be aliens, or a satellite, and Jesus may have been getting messages from space.  Even if the truth is known to a few religious personalities, most of us dwell in the liquid world.  There is nothing in the message from space suggesting who is distorting our reality or why or any clue how to escape it, except through the “anamnesia” (end of forgetting).  I see actual enemies in really existing capitalism.  Dick identified real enemies in many of his earlier works: the military, the state, the corporation.  I do not see what we gain by replacing these enemies with an vague and almost universal amnesia.  Furthermore, since the revelations to to so few, we are forced to accept the insights of that handful of philosopher kings, if you will.

Sadly, much of Dick fandom is attracted to the idea of a irresistible delusion or a total conspiracy.