Continuing with my reading of William T. Sherman’s Memoirs, today I will focus on Sherman’s application of total war.  I have come to realize that we can understand the U.S. government’s mad pursuit of terrorism with relentless drone strikes or the aggressive effort to bring Edward Snowden to hell for exposing the crimes of the Obama administration by revisiting William T. Sherman.  In many ways, the Atlanta campaign, the forced removal of the citizens of Atlanta after its fall, and his subsequent “march to the sea” defines Sherman’s career.  He is both respected and hated for these acts.  Unfortunately, much of the hatred for Sherman seems to come from Southern apologists.  I want to suggest that we can look at Sherman not so much as a tyrant or lunatic but instead as someone who fully accepted the logic of the state and violence.  He epitomized Weber’s suggestion that the state is simply that which monopolizes violence and power.  Unable to accept alternatives to itself, it had to come down brutally on competitors. 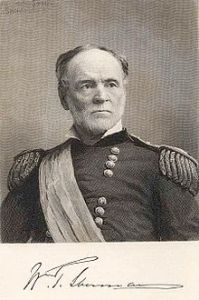 The key dialog in this section of Sherman’s Memoirs are between Sherman, the Confederate General J. B. Hood commanding the remaining Confederate armies in the Atlanta area, and mayor of Atlanta James M. Calhoun.  As in other sections of his book, Sherman simply recreated the original documents, with very little commentary.  Sherman was unwilling to celebrate for too long his victory at Atlanta.  He immediately set his sights on how to exploit the victory to destroy the South’s ability to resist.  In a letter to Grant, he wrote “We ought to ask our country for the largest possible armies that can be raised, as so important a thing as the self-existence of a great nation should not be left to the fickle chances of war.” (587)  Later in the same paragraph when he insists that the ruthless plundering of the countryside of Georgia will ensure that his “army will not starve” he suggests the next step in the war should be the “utter destruction of Wilmington.” (588)  I am not sure the classic reading that Sherman was plunged into a sort of heart of darkness through his experiences in the war.  He was not saying much that was not the logical extension of ideas he already expressed in the early years of the war.

He first informed his superiors of his plans to vacate Atlanta and destroy much of its infrastructure (particularly government buildings) on September 20, 1864 when he reported on talks he had with General Hood.  He reports that “it is sufficient for my Government to know that the removal of the inhabitants has been made with liberality and fairness.”  But he also states the “real reasons” for the exodus.  These are (1) use of houses for military storage, (2) limit the need for a garrison, (3) “we have a right to it,” (4) to avoid feeding the poor, (5) pro-Confederate residents will cause trouble.  His target was clearly the white population.  (In a letter to Hood, he stated that slaves could stay or go their own way.)

The correspondence between the Confederate leaders and Sherman on this issue are wonderful for its brutal honesty.  The brutality of the removal, he reminded Hood, is nothing more than the necessary consequence of the war, which was pushed on the U.S. by the rebels.  For every wrong committed by Sherman, he could point out many other examples committed by both sides.  Indeed, he believed there was nothing unique about his policy toward the citizens of Atlanta.  Hood remains horrified, in part because he seems to truly see Sherman as an agent of a conquering government.  “You came into our country with your army, avowedly for the purpose of subjugating free white men, women, and children, and not only intend to rule over them, but to make negroes your allies, and desire to place over us an inferior race.” (598)  In contrast to these vile words, Sherman was cold and logically (and seemingly largely indifferent to the role of race and slavery as a cause of the war).

The logic of war (brutality) and the logic of the state were connected in Sherman’s mind.  In response to the arguments about the legitimacy of successive, Sherman posited that the state is eternal and had an inescapable need to assert itself.  “You cannot qualify terms in harsher terms than I will.  War is cruelty, and you cannot refine it; and those who brought war into our country deserve all the curses and maledictions a people can pour out. . . The United States does and must assert its authority, wherever it once had power; for, if it relaxes one bit to pressure, it is gone, and I believe that such is the national feeling. . . . Once admit the Union, once more acknowledge the authority of the national Government, and, instead of devoting your houses and streets and roads to the dread uses of war.” (601)

The March to the Sea is simply an extension of Sherman’s logic.  In his orders to his troops, he stated that the purpose was “to strike a blow at our enemy that will have a material effect in producing what we all so much desire, his complete overthrow.” (651)  During the execution of the March to the Sea, Sherman was proud of how disciplined (how state-like, if you will) the destruction was.  The pillaging, foraging, burning, and destruction was all completed with the maintenance of military order.  From time to time, soldiers had to be innovative in their approaches and while “irregular” they were never performed without discipline.  This is one of the frightful elements of total war.

Sherman is completely correct, in the same way that Mao was, that political power is an extension of the ability to maximize military power and supplant all other competing centers of power.  Sherman does not waste time justifying his actions with a “cause.”  The war he helped win did lead to a second American Revolution, the rewriting of the Constitution, and the end of the most vile institution in American history.  Sherman speaks little on this, outside of generally calling the United States a “great” country.  Patriotism and a national story is for the people on the bottom.  For those who wield power, the weapon is its own justification.  Had Sherman learned this while a farmer or worker, he may have become an anarchist.  But he was a soldier.

One response to “William Tecumseh Sherman, “Memoirs”, The Atlanta Campaign “War is Cruelty””