“’Who’s Robin Hood?’
‘Why he was one of the greatest men that was ever in England—and the best. He was a robber.’
“Cracky, I wisht I was. Who did he rob?’
‘Only sheriffs and bishops and rich people and kings, and such like. But he never bothered the poor. He loved ‘em. He always divided up with ‘em—perfectly square.’
‘Well, he must ‘a’ ben a brick.’
‘I bet you he was, Huck. Oh, he was the noblest man that ever was. They ain’t any such men now, I can tell you.’” (157)

That the main plot of The Adventures of Tom Sawyer is about children pretending to be robbers and praising the accomplishments of robbers while also engaged in a real serious life and death battle with a real robber, totally odious in practice with none of the nobility imagined by children, is very significant. Tom and Huck can play robber, but when they encounter a real robber, they face him with maturity, courage, and nobility. This tells us that Mark Twain did not believe that the line between play and reality was that far. Play did not create a false vision of the world, even as it did allow for playful imagination. We can believe that Tom and Huck after meeting Injun Joe still believe that robbers could be heroic and noble Robin Hoods. In fact, we know this is true because Tom recommits himself to being a robber even after becoming rich (even if that is to scam Huck into staying with the Widow Douglas). 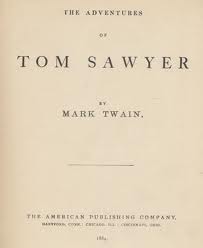 The adult worlds and the creative constructions of young people are mostly separate through the first half of the novel, but they become increasingly intertwined and combined in the second half. One example of this is the introduction of the summer activities to St. Petersburg, which brings, momentarily, a childish spirit to the entire town. A black minstrel show, the Fourth of July celebrations, a circus, a phrenologist and a mesmerizer all came in turn and “left the village duller and drearier than ever” when they left. By and large, it is the children who are forced into adult responsibilities, fears, and troubles. 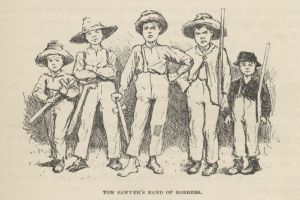 The murder trial of Muff Potter was the first time in the novel when Tom Sawyer was given a truly adult responsibility. The burden was on him to defend Muff Potter’s innocence. Of course to do so meant witnessing against Injun Joe, who sat in the audience looking fearsome. Although this made him a town hero, he remained in perpetual fear of Injun Joe. “Injun Joe infested all his dreams, and always with doom in his eye. Hardly any temptation could persuade the body to stir abroad after night fall.” (148) While most of us, I hope, enter adulthood without such a traumatic experience, fear is a component of that transition for most. Fear of money, fear for safety, fears of eternal loneliness. These are all ways that we are brought into adult responsibilities of college, careers, marriage, and saving.

Despite this, Tom is able to defend his freedom in the face of the pressures of creeping adult responsibility and he embraces them with greater seriousness and stoicism. This is what makes his assurance to Huck at the end of the book that he remains committed to being a robber feel so tragic. If he does grow to be a robber, it might very well be as a land speculator…although we do not share such fears for Huck. We already see in Tom some attraction to wealth that seems to be lost on Huck, when he looked on Injun Joe’s “treasure.” “He never had supposed for a moment that so large a sum as a hundred dollars was to be found in actual money in any one’s possession. If his notions of hidden treasure had been analyzed, they would have been found to consist of a handful of real dimes and a bushel of vague, splendid, ungraspable dollars.” (165) We can appreciate this childish approach to money (especially when people today hoard wealth that is literally inconceivable). There is some end to Tom’s innocence when looking at the wealth. It is clear from later passages that he wanted that treasure.

Both of the young boys get their chance to become local heroes, but again we find a different between the two. Huckleberry Finn’s heroism is anonymous as he informs on the actions on Injun Joe to the Welchman. Tom is more famous as he saves Becky from their (quite scary) adventure of being lost in a cave occupied by Injun Joe, at his final hideout. After his escape he did not tell about noticing Joe there, an oversight that had tragic consequences.

Tom’s role in killing Injun Joe needs to be addressed as part of his more harsh entrance to adulthood. Huck will enter adulthood through a moral question. Tom’s entrance to adulthood is shaped by violence and the acquisition of wealth. For two weeks, Tom did not mention bumping into Injun Joe in the caves. During those two weeks, the people of St. Petersburg locked the cave shut to prevent other children from getting lost. Only then does he tell the adult that Joe was there. Twain’s description of Injun Joe’s is one of the most horrible descriptions I have ever read and it has stayed with me for years. It conveys not only the horror of his death but the isolate that helped create Injun Joe and the insignificance of a single human life in the context of time.

In the final scene, Tom tricks Huck into becoming civilized. He perhaps does not know that civilizing Huck would end what Tom and the others of the town so admired about Huck. Tom perhaps just wanted him around him as a friend. He uses the attraction of a robber gang to convince Huck to be adopted by the Widow Douglas. In a way the final dialog between the two is a battle between adulthood and childhood, civilization and freedom.

Huck commits to staying with the “widder,” but it is his earlier words that stay with us. “The widder eats by a bell; she goes to bed by a bell; she gits up by a bell—everything’s so awful reglar a bodyc an’t stand it. . . . I ain’t everybody, and I can’t stand it. It’s awful to be tied up so. And grub comes too easy—I don’t take no interest in vittles, that way. I got to ask, to go a-fishing; I got to ask, to go in a-swimming—dern’d if I hain’t go to go ask to do everything. Well, I’d got to talk so nice it wasn’t no comfort—I’d got to go up in the attic and rip out a while, every day, to git a taste in my mouth, or I’d a died, Tom. The widder wouldn’t let me smoke; she wouldn’t let me yell, she woundn’t let me gape, nor stretch, not scratch, before folks.” (212)

Welcome to the adult work Huckleberry Finn. I am glad you see it my way.