He saw his wheat, like the crest of an advancing billow, crossing the Pacific, bursting upon Asia, flooding the Orient in a golden torrent. It was the new era. He had lived to see the death of the old and the birth of the new; first the mine, now the ranch; first gold, now wheat. Once again he became a pioneer, hardly, brilliant, tracking colossal chances, blazing the way, grasping a fortune—a million in a single day. (831)

One thing that is immediately apparent in the second part of Frank Norris’ The Octopus is that the major imagery shifts from that of the malevolent railroad to wheat. This is both because Norris wants to highlight the major theme of “The Epic of Wheat” (left unfinished at his death) and because we see the characters, while not giving up the political battle against the railroad which is hoping to squeeze them to death, engaged in the act of producing and harvesting their crops. Through action, both political and productive, the farmers of the San Joaquin valley begin to form a culture of resistance. The two work together. By continuing to produce in the face of almost inevitable defeat, they empower and give more seriousness to their political struggle. 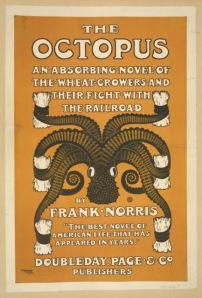 Norris describes this dilemma at several times through different characters, but we see again and again, small producers struggling against forces much larger then themselves. But the wheat must be produced. Unlike industrial workers, withdrawing the labor was not possible. Is an almost a requirement for a promethean belief in the future if one wants to farm? Maybe, but for Norris the reality is more brutal. The wheat has to be produced and sold because the farmers had no other choice.

Every cent of his earning was sunk in this hop business of his. More than that, he had borrowed money to carry it on, certain of success—borrowed of S. Behrman, offering his crop and his little home as security. Once he failed to meet his obligation, S. Behrman would foreclose. Not only would the Railroad devour every morsel of his profits, but also it would take form him his home; at a blow he would be left penniless and without his home. What would then become of his mother—and what would become of the little tad? (855)

The farmers’ failure to defeat the railroad leads to their being driven down into almost peasant status. Norris’ diagnosis in the conclusion is that this defeat was inevitable due to overwhelming power of the railroad, which could defeat the farmers either as individuals (through land prices and freight rates) or even entire political organizations of farmers through political power and the law. Norris explores both of these losing battles that lead to both very real deaths, shattered dreams, and the end of the Jeffersonian ideal of the autonomous agrarian.

In the backdrop of everything is the emerging global system and America’s place in it as a producer of wheat and an imperial power in its own right. The Octopus is one of the better introductions to the study of America’s place in the industrial world order (if a bit too long for undergraduate courses). We are introduced to this theme most explicitly by the character Cedarquist, a shipbuilder and merchant. He makes his money off the international transport of wheat. He understands how high the stakes are in the global wheat market and feels that the farmers are incapable of understanding the opportunities available to them if they only dream bigger. What Cedarquist does not fully appreciate is that the farmers are already forced into a global market by the railroads. It is not clear that Cedarquist offers a better alternative to “the Octopus.” In his mind, his dreams cloud his mind of the brutal realities of the indebted and squeezed farmer, who had the play the game by the rules pre-set by the capitalist class. The dreams of Cedarquist to remake the market and save the besieged San Joaquin farmer strikes us as delusional. Nevertheless, his monologue is a useful introduction to the theme of the place of American wheat in the global economy.

As a market for our Production—or let me take a concrete example—as a market for our Wheat, Europe is played out. Population in Europe is not increasing fast enough to keep up with the rapidity of our production. In some cases, as in France, the population is stationary. We, however, have gone on producing wheat at tremendous rate. The result is over-production. We supply more than Europe can eat, and down go the prices. The remedy is not in the curtailing of our wheat areas, but in this, we must have new markets, greater markets. (819)

The solution is to open up China, which can also allow the farmers to bypass the railroads and the grain elevators of Chicago. It could have worked if the railroad was not already strangling the western farmer.

This hints at yet another theme that Norris is grasping at: the end of the frontier. He may have been aware of Frederick Jackson Turner’s historical work on the frontier and its importance to American history. It certainly seems he was aware of the themes, as a California writer. For Norris this was not simply a matter of the emergence of civilization, but the slow triumph of capital, of the institution over the individual. If we look at his work as a whole we find that Norris contuinly comes back to this power of external forces (habits, family, greed) over individuals but never is the institutional critique so strong as in The Octopus. Perhaps this is why I kept thinking about the television series Deadwood while reading this novel. They are thematically united.

Well, so much for Frank Norris. There are some essays at the end of the volume, but as a group they do not add enough to justify an entire post. They are mostly about he saw the craft of writing. I appreciated his call for an American epic, expressed in these essays, for I always am drawn to the promethean.