He knew how to value the thoughts of other people, but he could not part with the privilege of observing and thinking for himself. He wanted business which would suffer at least nine tenths of his attention to go free. If it afforded agreeable employment that that part of his attention which it applied to its own use, so much the better; but if it did not, he should not repine. He should be content with a life whose pleasures were to its pains as nine are to one. He had tried the trade of a copyist, and in circumstances more favourable than it was likely he should ever again have opportunity of trying it, and he had found that it did not fulfil the requisite conditions. Whereas the trade of plowman was friendly to health, liberty, and pleasure. (238) 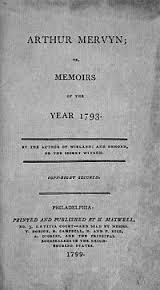 I have just noticed, looking at the dates of Charles Brockden Brown’s major works, that he published his three most well-known works—the three collected in the Library of America anthology—within two years. One of these, Arthur Mervyn, is a complex and elaborate tale that alone would have made Brown part of the American canon of literature. It comes quite close to make Brown the American William Godwin. Like Wieland, Arthur Mervyn takes on the “contrast” (to borrow from Royall Tyler’s play exposing the division between European/urban society and America/rural, republican, virtuous. In Wieland the ominous urban civilization is imported from Europe through characters. In Arthur Mervyn the city is looked at as a dark corner of American civilization. It is almost as if the cancer hinted at in the earlier work had taken root in America.

What struck me most of all when reading the first half of Arthur Mervyn was how psychological traumatic the protagonist’s wanderings between these two worlds was. He was really thrust into a world where there was no solid foundation to his life. His searching for work brought him into a position where he was completely alienated from what he was doing—forging documents as it turns out. Much of the anxiety and dark suggestion of the story is rooted in the bizarre relationship between the boss and the employee, starting from the arbitrary way he was hired to the ambiguous nature of the wealth he is producing. To be specific, one common theme in the story is rooted in the profession of forgery and counterfeiting money, which both appears to have real wealth, but certainly does not. So, what we have in this novel is a curious exploration of the nature of urban capitalism to disturb our comfortable categories. In the background of all of this is an ominous yellow fever epidemic that hits everyone regardless of class and status, yet another ambiguity of urban civilization. Long before Philip K. Dick mastered this theme, Brown laid it out with amazing clarity.

The novel tracks the adventures of Arthur Mervyn as he arrives destitute in the city. He begs for some money only to be hired by a strange man with an unclear profession. At first, Mervyn is not even clear on what he is to do. He knows only that he has a job. (How common is this feeling in late industrial society?) He discovers that the man—Welbeck—is a quite odious character all around. He makes his living by counterfeiting and forging documents. Welbeck apparently dies in a boating accident and Mervyn eventually gets sick with yellow fever when trying to transport Wallace, a man who robbed him earlier in the novel, to a farm for recuperation. Wallace tries to apologize for his earlier wrongs against Mervyn. The protagonist returns to Welbeck’s mansion. He begins to consider what to do with the money he got from Welbeck, who he thinks is dead. He decides whether to put it to public use or give it to Clemenza—a woman Welbeck claimed was his daughter, but whom Welbeck seduced and impregnated. Welbeck appears, apparently having faked his own death. When confronted on the money, Welbeck claims they are forged, so Mervyn burns them. This horrifies Welbeck, who confesses that they were real. He only claimed they were forged to get Mervyn to hand them over. All of this story is told in flashback to a Dr. Stevens, who had saved his life after Welbeck in anger turned out on the streets to die on the streets.

There is a hint in the first part of the novel of solutions to these disruptions. One that Arthur Meryvn is constantly struggling for is a return to the more stable life of the countryside. A braver response comes to him in the context of the yellow fever epidemic.

It is vain to hope to escape the malady by which my mother and my brothers have died. We are a race, whose existence some inherent property has limited to the short space of twenty years. We are exposed, in common with the rest of mankind, to innumerable casualties; but if these be shunned, we are unalterably fated to perish by consumption. Why then should I scruple to lay fown my life in the cause of virtue and humanity? It is better to die, in consciousness of having offered an heroic sacrifice; to die by a speedy stroke, than by the perverseness of nature, in ignominious inactivity, and lingering agonics. (351)

It seems to me that this is a suggestion that we should work in the terrible world we live in, and not incessantly seek escape to some idyllic paradise that may in actuality be a figment of our imagination. The disease of yellow fever, like the urban capitalist civilization, will spread regardless of our will. As it was for Caleb Williams (William Godwin), escape is not an option. Goodwill and solidarity, however, do offer a form of solidity in a liquid world.

Next time I will look at the rest of the novel.