So it begins. According to a roughly sketched out plan, I will be spending the next seven weeks providing some modest commentary on the works of Mark Twain. The Library of America collects Twains major (and some minor) writings in seven volumes. There is also a small volume of writings about Mark Twain, which I will look at with the conclusion of this series. Basically everything important in in those seven volumes, except the autobiography. (I do not know if that is slated for publication by the Library of America or not.) I will examine these works as chronologically as possible.

Mark Twain is one of our guides to industrializing America and the profound social changes that came along with the Civil War, Reconstruction, Westward expansion, the hegemony of capitalism, and the rise of the American Empire across the continent and the Pacific.

Reading the timeline of Mark Twain’s life, I was struck by how central death was to his the first years of his life. First, as a boy he faced his own death as he was often sickly. He first witnessed death in 1844 (he was nine years old) when he found a dead man in his father’s office stabbed to death. The next year, he witnessed a shooting on the streets of Hannibal, Missouri, where he grew up. His father died in 1847 and young Samuel Clemens observed the autopsy. Later that year he witnessed one drowning and found the body of another drown slave. In 1850, he saw a woman shoot the leader of a gang trying to break into her home. A cholera epidemic in Hannibal killed 24 people in 1851. In 1852, he gave matches to a town drunk who later burned down the jail with matches, dying in the process. In 1858 he was overwhelmed by grief when an accident on a steamboat he was working on exploded, killing a friend of his, right after he quit. And even when not personally witnessing death, he saw the ramifications of the Mexican War as a child and later served as an irregular for the Confederacy during the Civil War (only for a short time before moving to Nevada). Although that Confederate service seemed to consist mostly of him and some other young men from Hannibal camping out and gallivanting around. Over the course of these weeks, I hope to understand what, if any, impact these events had on his writing.

As a teenager he got his start in the newspaper business, working for and writing for various newspaper in Missouri. Nevada proved to be a breakout year for Clemens. He wrote on local politics and published heavily in the Territorial Enterprise. In 1864 and 1865 he started writing for California newspapers as well, eventually publishing his famous “jumping frog” story, after moving to San Francisco. This will lead to another turning point in Mark Twain’s life, as he moves back East and publishes his first collection of stories (1867).

One theme that seems to run through these early sketches and tales is people putting on false airs, not being who they are. Or even if they are serious, they fail to be up to the task at hand. Like the jumping frog of Calaveras County, many of Twain’s characters seem to have a belly full of quail shot. In the very first story collected here “The Dandy Frightening the Squatter,” the “dandy” approaches the squatter with bravado. And: “The squatter calmly surveyed him a moment, and then, drawing back a step, he planted his huge fist directly between the eyes of his astonished antagonist, who, in a moment, was floundering in the turbid waters of the Mississippi.” (1) Sometimes this is reaches metanarrative levels, as in the story “A Touching Story of George Washington’s Boyhood.” The narrator had forgotten the story he intended to tell and wrote instead on amateur musicians and their impact on neighbors.

Perhaps this comes from his journalistic roots, but Twain’s early writings also seem to express the absolute absurdity of mid-nineteenth century American democracy. Observing much on the subject from the Nevada during the writing of its state constitution, while also seeing a mad rush of people to make money from the mines of the territory certainly made him skeptical of the American tendency to try to get something from nothing. This came together when the constitution failed due to a tax on mines, which would only really affect the large miners, but everyone with a claim, dreaming to get rich, opposed the tax. Twain seemed to have gotten great pleasure over the strangely hobbled together state seal. “It had snow-capped mountains in it; and tunnels, and shafts, and pickaxes, and quartz-mills, and pack-trains, and mule-teams. These things were good; what they were of them. And it had railroads in it, and telegraphs, and stars, and suspension-bridges, and other romantic fictions foreign to sand and sage-brush.” (67) Where things actually matter, politics was more like the jumping frog competition or endlessly playing an accordion within earshot of neighbors. Someone will end up the victim. 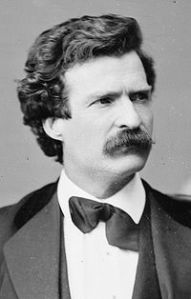 Much of this early writing blurs the line between fiction and news. There is one story (“Petrified Man”) which I really cannot determine if it is satirical or not. We know that “A Bloody Massacre Near Carson” was so convincing that other newspaper ran it as a true story about a man’s murder of his family. In fact, it seems to have been Twain’s attempt to construct a polemic against the power out of state banks had over local investors in the Nevada mining bubble and the tendency of the media to promote these strategies. “The newspapers of San Francisco permitted this water company to go on borrowing money and cooking dividends, under cover of which cunning financiers crept out of the tottering concern, leaving the crash to come upon poor and unsuspecting stockholders, without offering to expose the villainy at work. We hope the fearful massacre detailed above may prove the sadder result of their silence.” (58)

This is not to say that Twain was polemicizing everything or that under every piece of satire from his pen was an edgy message. The reason most of these stories exist is for our pleasure. And while in that case, I can do nothing but urge you to read them yourself. (The unfolding of “Whereas” had me laughing out loud again and again.) Yet, it is hard to read these sketches without realizing that Twain was seeing himself in a world getting progressively more silly, brutal, and indifferent.