As with my reading of the letters and writings of George Washington, I am not expecting to find in William Tecumseh Sherman a libertarian writer or even many libertarian themes.  Like Washington, he was a soldier and ran an authoritarian institution.  But also like Washington he was a key player in a revolution that certainly did expand human liberty.  Unlike Washington, Sherman was from humble origins and rose up through the ranks through his ability.  Like many other mid-nineteenth century Americans, Sherman was restless, anxious, and always eager to experiments and take risks.  Of course when we talk about the antebellum period, we also need to place an asterisk next to the term ‘democracy.’  There is something in the period when we look at people like Sherman or John Brown, who seemed to be comfortable in a certain liquidity even if they were not always successful in their attempts.  To the degree capitalism can be democratic, it must be fully participatory for all people.  I am not sure that is possible but maybe the U.S. got closest before the Civil War in certain frontier areas. 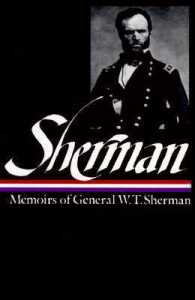 The Memoirs of General William T. Sherman was published in 1875, two years after he began writing them.  They were reworked ten years later into the form that we have today.  According to the introduction, his motivation was largely for historical preservation.  At the time of his writing he had doubts about when the official records from the Civil War would be released.  He also seems eager to get his side of the story down.  I suppose he was already a controversial figure a decade after the war.  “In this free country every man is at perfect liberty to publish his own thoughts and impressions, and any witnesses who may differ from me should publish his own version of facts in the truthful narration of which he is interested.  I am publishing my own memoirs, not theirs, and we all know that no three honest witnesses of a simple brawl can agree on the details.” (5)  I rather like this attitude.  It is one often ignored by freshmen history students who gobble up whatever document they read or whatever article they find online.

Sherman’s father was a lawyer, who became a state Supreme Court judge for Ohio, after his family moved there (Sherman was born in Ohio).  But since his father died when Sherman was nine years old, leaving his mother destitute with too many children, the Sherman’s were more or less placed under the protection of a family friend, Thomas Ewing.  The Ewing’s are the ones who move Sherman into a military career.  He entered the U.S. Military Academy in 1836, at 16 years old.  He did well at West Point, graduating in 1840.  He then served in Florida, where he participated in a small way with the removal of the Seminoles. He married Ellen Ewing, Thomas Ewing’s daughter.  At the time of the Mexican War, Sherman was engaged in recruitment efforts.  He spent most of the Mexican War in California where he performed his military duties but also engaged in various business enterprises, many connected to the gold rush.  Considered leaving the army to engage in various business deals but decided to stay in, taking up a commissary post in New Orleans.  (This may be where he learned some of his logistical skills that served him so greatly during the war.)  In 1853 he left the army to become a banker in San Francisco.  While there he remained in the California militia as an officer and had various adventures in that post.  In 1858, his bank failed and he returned to Louisiana  and took a teaching job.  When Louisiana seceded, he moved to St. Louis and later returned to the army at the rank of Colonel.  Although Sherman remained aloof from politics during the politically vibrant 1850s, he was from time to time prophetic, seeing slavery as the major division in the nation, predicting the rise of the free labor economy, and viewing Lincoln’s hopes of a short war as naive.  All of these events are described in the first eight chapters of the first volume of the memoirs.  Like Grant’s Memoirs, Sherman’s are by and large Civil War memoirs, as you might expect.

Sherman lived a quite liquid life in his first forty years.  At the age of 38, Sherman liquidated all of his debts, leaving himself with only $1,000.  Sherman does not really comment on the ethos that led him to this restlessness, but he does point out the type of energy that drove the gold rush because it complicated his life in the military there.  Many soldiers deserted because there was more money to be made in the gold rush economy (often paying wages 2 or 3 times what the military received).  Sherman describes some of his efforts to stop this type of desertion but he is not very judging, seeming to understand their motivations.  I was reminded of Melville’s Omoo (see here and here) when reading the first part of Sherman’s Memoirs because they exemplified the restless spirit that drove the protagonist of that novel to never be satisfied with the job he held.

With the outbreak of the war, we start to get some of Sherman’s ideas about violence.  One thing he stresses from the beginning is the brutal equality of war.  (This is in Bierce’s work as well.)  He tells one woman that “young men of the best families  did not like to be killed better than ordinary people.”  Allow me to quote at length one of his first experiences of violence during the war.  “One of the regular sergeant file-closers ordered him back, but he attempted to pass through the ranks, when the sergeant barred his progress with his musket “a-port.” The drunken man seized his musket, when the sergeant threw him off with violence, and he rolled over and over down the bank. By the time this man had picked himself up and got his hat, which had fallen off, and had again mounted the embankment, the regulars had passed, and the head of Osterhaus’ regiment of Home Guards had come up. The man had in his hand a small pistol, which he fired off, and I heard that the ball had struck the leg of one of Osterhaus’s staff; the regiment stopped; there was a moment of confusion, when the soldiers of that regiment began to fire over our heads in the grove. I heard the balls cutting the leaves above our heads, and saw several men and women running in all directions, some of whom were wounded. Of course there was a general stampede.  Charles Ewing threw Willie on the ground and covered him with his body.  Hunter ran behind the hill, and I also threw myself on the ground. The fire ran back from the head of the regiment toward its rear, and as I saw the men reloading their pieces, I jerked Willie up, ran back with him into a gulley which covered us, lay there until I saw that the fire had ceased, and that the column was again moving on, when I took up Willie and started back for home round by way of Market Street. A woman and child were killed outright; two or three men were also killed, and several others were wounded. The great mass of the people on that occasion were simply curious spectators, though men were sprinkled through the crowd calling out, “Hurrah for Jeff Davis” and others were particularly abusive of the “damned Dutch.” (191–192)  It was events like this that may have convinced Sherman, very early on, that the war would be long, bitter, and indiscriminate in its violence and that the proper response to such insanity is acceptance.