Eye in the Sky is set almost entirely in the characters minds, but it is one of the most grounded of Dick’s works.  It also does not speak to me about late capitalism the way many of the other works by Dick that I have been reviewing.  Eye in the Sky functions as a strong polemic against the Cold War security culture that defined not only the politics of the 1950s but also manifest in everyday life through loyalty oaths and blacklisting.  At the same time, Philip K. Dick is making a case that ideology matters (in a sense accepting the Cold Warriors’ position on the threat of Marxism in the post-war world).  Through a voyage through four fascinating and playful worlds, Dick shows that the mental realm we live in shapes how we act and shaped the world we live in. 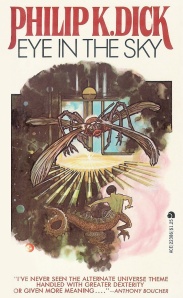 Eight people fall into a particle accelerator, or something.  This knocks them unconscious and causes massive injuries but also thrusts them into shared realities that manifest from the delusions of the accident victims.  They leave one only to enter another.  As one character questions: “Until we have telepathy and can get into people’s minds, we’re going to have to depend on this statistical stuff [to find out if someone is a communist].”  The accident creates this honest look into other people’s mind.  We think of telepathy as a simple snapshot of anther’s stream of consciousness.  As Dick shows in Eye in the Sky, people’s mental realms are often so different from our own, often relying on entirely different rules, telepathy could never be as simple as mind reading.  Every attempt would involve an entrance into another world.  This is an extremely pessimistic view, casting doubt on our ability to really communicate across minds.

The eight victims reminded me of a children’s picture book teaching young readers about the different types of people in the town.

Jack Hamilton – A technician at a government military contractor, a talented scientist.
Martha Hamilton – His wife, an alleged communist but in reality a harmless liberal.
Charley McFeyffe – A policeman who we first meet as an investigator into the actions of Martha Hamilton, yet he likes to pose as their friend.
Arthur Silvester – An old soldier
Joan Reiss – A young businesswoman
Bill Laws – An black tour guide and physics graduate student
Edith Pritchet – A mother
David Pritchet – Her son

The novel opens with McFeyffe’s investigation of Martha Hamilton as a possible communist.  She attended one to many lefty meetings and read too many communist leaflets.  For this Jack Hamilton is forced to either quit his wife or quit his job.  Later that day, the Hamiltons, along with McFeyffe, attend a demonstration and tour of a particle accelerator.  They fall in and are zapped into these alternative realities.

Delusion One: Second Babiism.  This is the invention of Arthur Silvester.  Second Babiism is a form of Islam that attracted Silvester during one of his visits to Chicago.  The world he “created” (this is a poor term, what is really going on is that his mental construct is imposed on all others) assumes that prayer works, that God is real, the sun orbits the earth, and that faith and points toward salvation are currency.  Hamilton’s company is transformed from a military contractor into a company investigating the technologies of theophonics (communication between man and God).  The character escape this delusion and instead of waking up, they enter another delusion.

Delusion Two: Neutered Puritianism.  This world is the construct of Edith Pritchet, who desires that anything unseeingly is removed.  This includes sex, prostitutes, certain animals, and illnesses.  Pritchet has complete control over what is excised from this world.  She also has the goal of expanding culture to the masses.  Hamilton’s company is now engaged in this effort.  “Our purpose is to turn the immense resources and talents of the electronics industry to the task of raising the cultural standards of the masses.  To bring art to the great body of mankind.”  In this world, Sigmund Freud argued that “in the healthy, uninhibited human, there is no sexual drive and no curiosity or interest in sexuality.  Contrary to traditional thought, sex is a wholly artificial preoccupation.”

Delusion Three: Paranoia.  Joan Reiss is responsible for this world.  She is mentally ill and suffers from paranoia and anxiety.  In this world, everything that happens is the product of an external conspiracy.  Although mentally ill, Reiss’ delusional construct is the closest to reality of the 1950s Cold War paranoia.

Delusion Four: Class War.  We assume at first that Martha Hamilton created this caricature of America as envisioned by radical Communists.  In fact, it was from the mind of McFeyffe, the policeman and Cold Warrior.  “The Communist idae of America — gangster cities, full of vice and crime. . . and the rural areas.  Indians, wild killings and lynchings.  Bandits, massacres, bloodshed.”

Race did play a role in all of these delusions.   Bill Laws’ role, diction, and characterization changed based on how the mind of each construct’s originator viewed black people.

The characters finally escape the delusions.  Hamilton attempts to prove that McFeffe is an implanted Communist agent but is unsuccessful since he lacks evidence (contrasted with the booklet produced on Martha Hamilton).  The Hamilton’s choose to leave and start their own business.

The exposure of McFeyffe and the innocence of Martha Hamilton, especially considering that McFeyffe’s leftism was a true threat and Hamilton’s closer to liberal curiosity, is enough to make this novel a significant polemic against the Cold War security culture.  As Hamliton says at the end: “I’m trying to say that a man can be all those things and still be a dangerous subversive.  And a woman can sign peace petitions and subscribe to In Fact, yet love the very dirt this country is made of.”

More troubling is Dick’s broader point.  Almost any ideology can be dangerous and we all have certain expectations, assumptions, and values that, if imposed on the rest of the world, would be positively horrifying.  Ideology matters because it shapes how we see others, how we interact in the world, and how we interpret commonplace happenings.  We did not get to see the world derived from the mind of born again Christians, free market capitalists, fascists, or new age hippies.  Sadly Dick’s novels are always too short.  But we know enough to assume that they would be no less terrible for those who did not share those assumptions.