Lynd Ward’s second graphic novel Madman’s Drum explores the inheritance of a father’s crimes, the perversion and insanity of a life committed solely to intellect, and the banality of evil.  Ward also explores the ways in which intellect provides a barrier to community, family, and happiness. 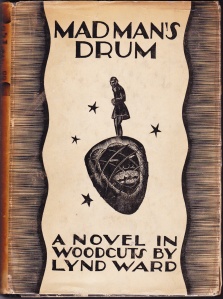 The setting of Madman’s Drum is unclear.  It seems to be a modern industrial economy with modern labor conflicts but is only one generation from sailing ships and the slave trade.  The protagonist ends the novel in late middle age, so I suspect the novel covers most of the 19th century.  Like Gods’ Man, Madman’s Drum has something to tell us about the horrors of exploitation and the dissatisfaction inherent in the unstable industrial world but it does this from the perspective of the oppressors (a slave trade and a intellectual).

In his essay on Madman’s Drum, Ward admits that Gods’ Man was too simple, too black and white.  “The things that happen to the central character, from boyhood through adolescence to the final crisis of his maturity, are not unique to a distant time and place.  Given the modifications imposed by varying social systems, they can be encountered almost anywhere at any time.  They are things that spring from universal human relationships — for example, between child and parent or man and wife–and can include the problems of those who seek solutions in running away, as well as those who take the shelter of the family unit too much for granted and so are quire unprepared to cope wit the abrasive world outside.” (789)   He admits to being heavily influenced by the Sacco and Vanzetti trials.  Ward will place his protagonist in the role of persecutor in a similar trial.

The novel is broke until nine sections and is made up of 118 wood carving plates.  It is, however, much more complex and disturbing than the more hackneyed plot of Gods’ Man.
Part One introduces the father of the main character.   He is a slave trader and comes across an African playing a drum.  He steals the man and his instrument, sells his captive as a slave and returns home rich.  He has a family waiting for him in his home town.  He returns with a chest of gold and the drum he stole.  He uses his wealth to upgrade his home.  But lacking musical interest he places the drum on display, along with the sword he used to secure his family’s wealth.  The slave-trader becomes a respected member of the community.

Part two introduces us to the main character (I will call him “the intellectual”) and we see how he was put on the path of the intellect.  The father finds him playing the drum.  He disciplines his child and sets him to work mastering the texts in his massive library.  There will be no time for music, which the man associates with savagery.  Paradoxically, he desires to return to his old job in Africa.  The father is lost at sea.  While he paid for his crimes, the family inherits the wealth and the drum and his father’s lesson to his son to savor the intellectual over the emotional.

Part three explores the adolescence of the intellectual.  He ignores the life around him for his studies.  Embraces religion for the sake of his mother.  He even seems to write a book.

Part four, as a young man the intellectual turns his back on sex, drink, and camaraderie.  He is developing to be a strange young man. Learning in his books of ancient Egypt, he turns his back on Christianity by throwing a cross on the ground.  His mother trips on the cross and dies in the fall.  This section ends after his mother’s funeral.  He looks out his window and sees a flute player.  The player appears to him demonic and mad.

Part five shows us the intellectual in middle age.  He makes some astronomical discovery and but his results are taken with indifference by other astronomers.  Reaching the peak of his career, he chooses to marry.  Not for love, it seems, but as something he has to do.  He is brutally cold but perhaps his wealth and prestige encourage his future wife’s father of the power of the match.

Part six is about the misery of the wife.  She produces two girls for the intellectual but she is miserable.  She meets a musician who tries to seduce her.  In a plate, the intellectual is shown separated from his wife by a literal wall of books.  His wife enters into the affair with the musician, which somehow ends in her death.  (The confusion here seems to be universal.  Art Spiegelman comments on how confusing this part of the novel is.)

In part eight, we learn of his second daughter’s love affair.  The intellectual tries persuading her to follow his path, but she rejects the intellect.  She meets a womanizer (or maybe a pimp) who seduces her and begins selling her to the men of the community.

In the final section, the intellectual learns that his daughter has become a prostitute.  The pimp returns a small flower belt and throws the intellectual out on the street.  He pleads for aid from the community, who viciously laugh at his misfortune.  Finally, surrounded by the graves of the people in his life he goes insane, takes the drum he was forbidden to use as a child and goes off with the flute player.

A very strong theme here is the danger of the rejection of the cultural, emotional, physical realm for brutish intellect.  The intellectual’s father found the drum – the symbol of the emotional and cultural realm – in “dark Africa” and acquires it by committing a brutal crime.  The intellectual, by rejecting the physical and emotional is able to participate in horrible crimes – including the unfair judicial murder of a labor organizer.  His intellect gave him the emotional distance required to be as brutal as he needed to be.  Although Ward would not have had the language, he is describing the banality of evil here.

Every attempt the intellectual made to move beyond his mind failed.  Religion, marriage, career, and law all are inadequacy to break him out of his isolation.  In some ways, they only reinforced his isolation.  At the end, he is baffled at the indifference and hostility of the crowd toward his losses.  These are, however, simply the end result of his perpetual indifference to his community.