The U.S. victory in the Pacific war resulted in thirty years of a clear American domination over the Pacific.  The occupation of Japan, neo-colonial domination over the Phillipines, participation in the smashing of the revolution in Vietnam, and propping up the Chiang Kai-shek regime in Taiwan as the “One China” all were signs that the Pacific was an American lake.  Philip K. Dick wrote, The Man in the High Castle, which imagines the opposite, at a time when the U.S. was at its height of post-war power, before the failure in Vietnam, before the Soviet’s started to match the U.S. in the arms race, and before economic malaise fell over all of the capitalist West.  To look just at the Pacific, since 1970 the United States has faced two emerging Asian powers, both in a sense losers in the 1940s.  Japan, rising from total destruction, defeat and occupation, into the second largest economy in the world.  That position was overtaken in the last decade by China, the second great threat from East Asia.  Although I was young during the concerns about Japan’s rise, I recall people predicting the Japanese purchase of entire states, paranoia about the trade deficit, and constant anxiety over the competitive advantage provided by East Asian forms of capitalism.  None of that has changed since the 1970s and 1980s, only now the economic miracle has shifted to China.  Even in historical scholarship we find scholars suggesting that the rise of China is nothing more than a resetting of global normalcy after a few hundred years of European hegemony.  This is the thesis of ReOrient by Andre Gundre Frank. 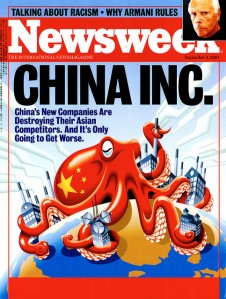 This threat and anxiety has been accompanied by some cultural fascination with the East.  In the old days of colonialism, some fascination existed but it was framed in the old orientialist way.  Europeans remained confident of the superiority of their thought and read Confucius or Daoist texts with the fascination masters something have for their underlines.  In this new milieu of threat, the interest in the East looks different.  Rather than mere confident curiosity, we can look to the East for answers to why they are so successful and us so weak?  This is the exact opposition of how Chinese, one hundred years ago, look at the West, which they investigated for clues to their comparative wealth and power.  Zizek gave a talk suggesting that Max Weber, if alive today, would have rewritten his book and called it “The Buddhist Ethic and the Spirit of Global Capitalism.”  As evidence, he used the high number of top managers of global corporations who actively embrace Buddhism.  Since Japan’s rise, people have wondered if the Confucian system of management, based not strictly on a free labor market but networks of obligation, would not result in greater efficiencies in the labor market and helps explain East Asian success.  The Man in the High Castle predicts that the domination of East Asia over America, in this case through an alternative history where the Axis won the Second World War, would accompany the assimilation of East Asian traditions into America.  This is not a surprising outcome.   Much of the history of colonialism has been subject people reading the books their masters wrote for hope that it will help them understand their defeat. 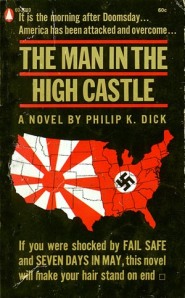 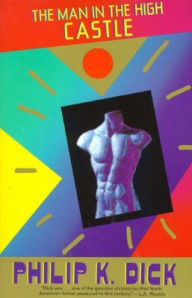 How we face colonialism is a function with many variables.  The first chapter of The Man in the High Castle investigates two men with very different approaches toward the occupation of the West Coast by Japan.  Frank Frink is a war veteran on the losing side and was recently fired for essentially non-collegiality.  Like many other Americans under Japanese occupation, he uses the I Ching to make decisions.  He reads these Asian texts for guidance but feels resentment at the occupation and his lot in life.  Divorced (and still in love with his wife Juliana) he starts the book at a low point in his life.  The other character we meet in the first chapter is Robert Childan.  Childan is a small business owner, running a business that sells pre-war artifact.  His biggest customers are Japanese.  He adopts their customs and clearly profits from the occupation.  He never internalizes Asian values.  Frink and Childan are two sides of the same coin.  Frink is openly hostile to the occupation but seeks wisdom from Asia in his quest for personal freedom.  He is authentic.  Childan is the opposition.  He puts on the facade of contentment but internalizes little.  He is not the reflective colonial subject, like Frink is.  Instead, he is the contemptible opportunistic.  His false image is also a bit ironic, since his major crisis in the novel deals with suggestions that his artifacts are fakes.  Just as the Japanese cannot see that he is faking his acceptance of Japanese rule, Childan can not know if his suppliers are lying to him.  However, in either case it matters little.  Childan can still sell his goods and since he will never sacrifice his financial security in support of his anti-Japanese sentiment, he will never be a threat to the occupiers.  The lie matters little for the functioning of the system.  It is Frink, who poses a real threat, ultimately using his expertise and resentment to try to spread the rumor that his former employer produced fake antiques.

These two characters provide two quests.  Childan’s question is for security and profit.  His anxiety over the authenticity of his sale items is ultimately about the survival of his business.  It does not seem to go beyond that.  He is the quintessential collaborator and profiteer.  Frink is on a search for autonomy.  This leads him to start a business making jewelry.  While the business does not go well and Frink is arrested, his mission seems to provide a true threat to the system.  Even his construction of jewelery seems to wear away on the macro-lie.  This brings us to the third quest.  This one is pursued by Frank Frink’s ex-wife Juliana.  She has become fascinated with a book called The Grasshopper Lies Heavy, which is an alternative history that suggests what would have happened had the Allies won.  Importantly, The Grasshopper Lies Heavy is not based on the real history of the Second World War.  It is in reality a third version of reality.  Juliana, after stopping an assassination attempt on the author of the banned book, finds the author and learns that he used the I Ching to write the book, suggesting a greater truth to The Grasshopper Lies Heavy, a truth that is subtlety confirmed throughout the novel in other ways.  Notice with me that Juliana is able to transcend the reality.  She is not as resentful of the occupation, even taking who she believes to be an Italian as a lover.  She is also not seeking just to survive and prosper.  She is the authentic individual, capable of rising above these more petty concerns.

Philip K. Dick, like the author of The Grasshopper Lies Heavy, uses the I Ching to write his book.  On the surface this is simply a passive acceptance of fate.  We can make decisions based on an oracle, and by doing that set aside our personal will and freedom.  However, the characters that rely on the I Ching – Frank Frink, most notably, are some of the most assertive.  Childan, who internally resists these Asian imports, does not use it but is one of the most passive characters in the novel.  Acceptance of fate is not a path to weakness.  It is through an awareness of the forces that work against us that we can be willed to action.  The I Ching cannot provide clear answers, only hints through cryptic messages.  The interpretation of each hexagram is where our important decisions are made.  In the same way, mere acceptance of fate does not doom us to passivity, it teaches us our potential and limit and challenges us to make the best of our limits and try to transcend our limits.  Even if we accept the use of the I Ching as passive, remember that the advice it hands down can be passive or active.  More often then not the I Ching commands the user to action. 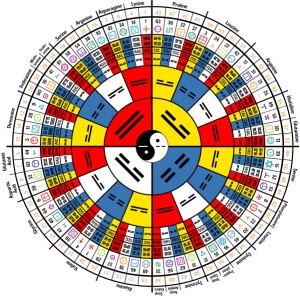