“There was a time for sneering. In all the ages of the world and in all its lands, the huge inert mass of humbler mankind,—compacted crush of poor dull dumb animals,—equipped from its centre to its circumference with unimaginable might, and never suspecting it, has made bread in bitter toil and sweat, all its days for the feeble few to eat, and has impotently raged and wept by turns over its despised housholds of sore-hearted women and smileless children—and that as a time for sneering. And once in a generation, it all ages and all lands, the little block of inert mass has stirred, and risen with noise, and said it could no longer endure its oppressions, its degradation, its misery.” (“The New Dynasty,” 885)

If we consider Mark Twain’s first published writings in 1852 as the start of his career, the early 1880s marks the half-way point in his career, but only a decade into his national fame that began with the travel narrative Innocents Abroad. By all accounts, the 1880s were a productive year for him. Twain’s income from his books was significant enough to afford him various investments (including in the Paige typesetter beginning in 1889, which would almost bankrupt him). His major works from the 1880s are The Prince and the Pauper, Life on the Mississippi, The Adventures of Huckleberry Finn, The American Claimant, and A Connecticut Yankee in King Arthur’s Court. As people who are familiar with Twain’s biography know, this decade also was the last before financial woes and the death of Susy (his favorite daughter) led him to begin to look at the world in new ways. Throughout the 1880s, though he is riding high, and focused on his writing and professional obligations. 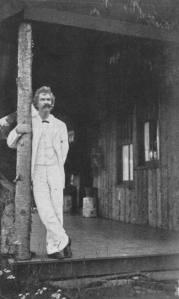 Many of Twain’s shorter works from this period are speeches delivered in Hartford or nearby areas. He even joked about how prolific he was as a public speaker and how people like him should stop hogging the stage. Yet his voice was in high demand.

The most striking of these speeches for me was “The New Dynasty,” a speech delivered in March 1886, but not published until the 1950s. I wonder how many Mark Twain fans even know of this importance speech. It was delivered in the context of the Knights of Labor agitating for typesetters. The details are note quite clear from the text; it is more of a broader polemic of power. It is delivered in perfect seriousness. It speaks to American values and history while also making a case for the necessity of revolution against the powerful. It warns of the growing power of the elite and the emerging “dynasty” of a united labor, a group he expresses deep sympathies with. Now, I know of the anti-imperialist Mark Twain, but I was never exposed to this side of him before. I suppose most do not. “The New Dynasty” begins with a general discourse on power. “Power, when lodged in the hands of man, means oppression—insures oppression: it means oppression always.” (883). He moves from the kings of old to the “horse-car company,” engaged in its new industrial forms of oppression. Twain argues that it was in America that this was first and most substantially challenged, not from the works of founders or a simple republican form of government, but from the voices of the underclass. “But when all the children in a little world cry, one is roused out of his indifference by the mere magnitude of the fact­—and he realizes that perhaps something IS the matter; and he opens his ears.” (887) He then moves to the rising power of labor in America. In an almost Marxist analysis he says that they will seize power and use it to oppress the minority. “He will oppress the thousands, they oppressed the millions; but he will imprison nobody, he will massacre, burn, flay, torture, exile nobody, nor work any subject eighteen hours a day, nor stave his family.” (888) And in sharp contrast to much later nineteenth century rhetoric on labor, he calls the organized workers the highest stage of American civilization.

Emblem of the Knights of Labor

How I would have loved to have been there to see this speech delivered. This for me is the highlight of this set of documents, but there are some other nice themes Twain considers.

In “Plymouth Rock and the Pilgrims,” a speech delivered before the New England Society of Philadelphia, Twain assaults the cult of the Mayflower and the strange devotion Americans had to these founders. He is in full Promethean mode when he assaults the slavish devotion to odd heroes who (he humorously points out) largest claim to fame was getting off a boat; staying on the boat would have been more remarkable. His bolder interpretation of American history comes later in the speech, when he sets his solidarity with the people oppressed by the New England Puritans: religious dissenters, witches, slaves, Indians. “The first slave brought into New England out of Africa by your progenitors was an ancestor of mine—for I am of a mixed breed, an infinitely shaded and exquisite mongrel. I’m not one of your sham meerschaums that you can color in a week. No, my complexion is the patient art of eight generations.” (783–785) I guess he is speaking as America—that mongrel and projectoral nation—in this speech.

Two documents refer to his (I guess in jest) attempt to raise a statue to Adam, in which he tries to move beyond a narrow identity as an American. He does this at a time when the United States was mad with commemorations to heroes from the founding era and the Civil War. By proposing a statue to Adam, Twain was calling for a more inclusive commemorations project, that does not simply speak to the values and history of one nation. He wanted it as an alternative to the Statue of Liberty, for Adam was the true outcast.

If anyone is interested in Twain’s experiences in the Civil War, “The Private History of a Campaign that Failed” is useful. It goes beyond autobiography and becomes an anti-war polemic. His experiences in the Civil War took place over a couple of weeks and mostly involved camping out with friends, practicing shooting, and running away from rumors of Federal Army advances into their area. There was a tragedy however. He describes his involvement in the killing of a stranger who approached his camp. “And it seemed the epitome of war; that all war must be that—the killing of strangers against whom you feel no personal animosity; strangers whom, in other circumstances, you would help if you found them in trouble, and who would help you if you needed it. My campaign was spoiled. It seemed to me that I was not rightly equipped for this awful business.” (880)

If young Samuel Clemens was a deserter because he refused to take the lives of another human being, than he is a great hero. We need more such heroes, and maybe a few more monuments to deserters instead of soldiers.