The long essay by James Baldwin, The Devil Finds Work, is a personal history of film.  It is a rather clever approach because us moderns learn a great deal about the world and ourselves from films.  Particularly in our youth, films are quite real to us. Television and cell phones may be taking over the function as cultural parents but screens have this power of telling us what we want truth to be, even if they best the can manage are clever simulations.  On my Philip K. Dick project, I was just writing on the images of work in television and film.  Series like Seinfeld and The Office stress that work is something boring, odious, and to be avoided.  Much of these series involve people avoiding work while they are there, or (in the case of Seinfeld) surviving without jobs.  Films like Office Space and The Good Girl make a similar point that work is essentially mind-numbing and useless.  This has been a powerful image for me and I likely have internalized many of these messages, but the fact is for millions of workers, labor remains physically demanding, scientifically managed, and constant.  I doubt we could ever see a series like The Office documenting the lives of Foxcom workers.  We simply cannot believe they would have time for games in such a place.  But now I am wondering if the average office environment is much more accommodating of the workers’ whims.  The Office is what we want work to be, because we cannot face the reality. 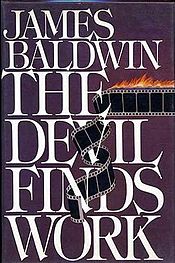 Benedict Anderson argued that print culture was the glue that united the people into an “imagined community” at the time that loyalty to religion and empire faded.  To survive death, we needed to new device and that became nation.  Print capitalism made nationalism possible by forcing on us a common language, a common culture discussion, common expectations, and a common mythology.  Subcultures and alternatives were not cultivated because it was not cost effective to do so.  I believe that argument is convincing for the 19th century.  It is also convincing for the 20th century, but we need to add films and television now as the conveyers of a common culture.

So, Baldwin’s The Devil Finds Work can be read as cultural studies.  He explores a couple of questions.  The first is, what was the role of film in his personal development and emerging consciousness of the color line?  As we know from his other writings, there is little that films could add to daily life in Harlem to convince Baldwin that he was an outsider in his own country, but films did seem to play a role.  The second question has to do with the role of film in interpreting and sustaining the color line.  He moves on from the films of his youth to deconstruct popular films like The Exorcist and racially progressive films like In the Heat of the Night and Guess Who’s Coming to Dinner?  The trajectory of the analysis goes from the childhood subjectivity to adult objectivity and criticism.   I wonder how many film viewers today make this chance?  I know adults who get excited about summer blockbusters as if they were still grade-school children.   But maybe this maturation is a bit sad.   There is a wonder in how children look at film.  “I was a child, of course, and therefore, unsophisticated.  I don’t seem ever to have any innate need (or, indeed, any innate ability) to distrust people: and so I took Bill Miller as she was, or as she appeared to be to me.” (481)

One of the issues Baldwin seemed to face as a child was that most of the faces he saw on the screen were white, or to be more precise, not familiar to Baldwin’s world.  “It is not entirely true that no one from the world I knew had yet made an appearance on the American screen: there were, for example, Stepin Setchit and Willie Best and Manton Moreland, all of whom, rightly or wrongly, I loathed.  It seemed to me that they lied about the world I knew, and debased it, and certainly I did not know anyone like them–as far as I could tell; for it is also possible that their comic, bug-eyed terror contained the truth concerning a terror by which I hoped never to be engulfed.” (492)  After 25 pages of these youthful memories, Baldwin moves straight into cultural analysis.  I will just point out a couple highlights.

He was harsh on Guess Who’s Coming to Dinner?, the film about a successful black doctor who wants to marry a white woman.  The story climaxes with the acceptance of the parents of this union.  Spencer Tracy plays the liberal white father who is forced to take seriously his views on racial equality.  He was troubled by the film’s inclusion of a stock figure of American film, “the loyal nigger maid.” (532) This figure existed in films for decades and even finds its way into this progressive deception of interracial coupling.  He also found the portrayal of the physicians parents unrealistic, both in their condensation of his upward mobility.  In reality, their pride would have been more conspicuous and the lack of it suggested a misunderstanding of “the wonder doctor’s eminence, and the effect that this would have on his parents.” (535)  Worst, however, is the quick exile of the couple from the United States.  This was a failure to follow through on the challenge of the film.  An interracial marriage is acceptable to society and to the parents, as long as the couple leaves as soon as possible.

Baldwin discusses his work on The Autobiography of Malcolm X, although this was a failed effort, Spike Lee used this script as the basis of his film on Malcolm X.  He talks about how difficult it is to make the transition from novels to film and reveals anxiety over the loss of creative autonomy when working with a group, a necessity in film making.

The Exorcist terrified Baldwin for it told the true story about how we are surrounded by demons.  “For, I have seen the devil, by day and by night, and have seen him in you and in me: in the eyes of the cop and the sheriff and the deputy, the landlord, the housewife, the football player: in the eyes of some junkies, the eyes of some preachers, the eyes of some governors, presidents, wardens, in the eyes of some orphans, and in the eyes of my father, and in my mirror.  It is that moment when no other human being is real for you, nor are you real for yourself.  The devil has no need of any dogma–though he can use them all–nor does he need any historical justification, history being so largely his invention.  He does not levitate beds, or fool around with little girls: we do.” (571)

I found this to be a wonderful and engaging book.  It makes us ponder the power of film over how we look at the world and a reminder that the real world is much worse or much better than the crude simulacra we have managed to construct.