Time Out of Joint, published in 1959, extends many of the themes Philip K. Dick explored in Cosmic Puppets.  The settings are comparable.  In both, we find ourselves in a small town of the 1950s.  In both novels, the world that the characters see for themselves is an artificial facade, covering up the reality.  Time Out of Joint is certainty more mature. Here, the powers that a constructing the reality are human.  In a sense, it evolves out of Cold War anxieties of secrete government agencies, the continual threat of devastating war, and the uncertain loyalties of even close friends and neighbors.  In The Comic Puppets, there were supernatural forces that constructed the false reality as part of a cosmic battle.  This makes TOOJ a more politically relevant work and more of a window into the world that we live in. 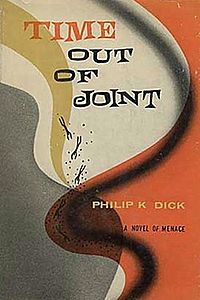 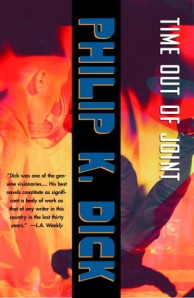 Plot
Like most of Dick’s early novels, TOOJ has a rather straight-forward plot.  Early in the novel we are introduced to Ragle Gumm, an unemployed man who makes his money as champion of a newspaper contest, “Where Will the Little Green Man Be Next?”  The contest involves simply choosing from a matrix of squares.  There are clues provided, but these seem to have little impact on the answer.  Nevertheless, Gumm is able to guess correctly continually by observing patterns and maintaining careful records.  As the novel unfolds, Gumm notices strange changes to his world.  He misremember things, such as if the bathroom had a cord-activated light or the newer light swtich.  He also sees small pieces of papers with the name of the thing that should be there.  Eventually, be becomes convinced that the world around him is a sham and that he is the target of a deception.  This turns out to be true.  It is not 1959, it is 1998 and humans are involved in a Civil War between the Earthlings who have restricted expansion abroad and the “lunatics” (denizens of the Moon) committed to interstellar expansion.  Gumm sided with the people of the Moon, but can predict where they will attack next.  Before his defection he worked for the Earthlings making these predictions.  To sustain this role he was placed into this artificial world of his youth.  The newspaper contest is the means by which he will continue to predict where the nuclear attacks will strike.  He, like many of us today, is the unwilling supporter of institutions outside of our control.

The Suburbs and Reality
Dick often places the false, bizarre, liquid, and artificial in the suburbs, the world he knew most well in over-developed suburban California.  The novel begins with an interesting conversation, suggesting that even political loyalties are merely functional in the suburbs.  “Anyhow I don’t think there’s going to be any depression; that’s just Democratic talk.  I’m so tired of those old Democrats trying to make out like the economy’ going to burst down of something.”  When someone mentions that the woman making this claim was a Democrat she replied, “Not any more.  Not since I moved up here. This is a Republican state, so I’m a Republican.” Urban areas are no less man-made than suburbs, but there seems to be a more organic feel to the development of cities.  Suburbs are planned, zoned, and manicured in bizarre formations.  The grass is imported from Germany.  Even the animals becomes domesticated and adapt to the constructed human world.  It is an ideal place for paranoia to set in.  Gumm is the subject of a mass conspiracy, but most of the novel explores his growing sense of displacement.  The realization of the truth is simply an appendix to the story.  This is perhaps what makes The Matrix rather lazy; it jumps immediately to the “really real.”

Dick introduces the idea that the celebrities and heroes of our world are constructed.  I suspect this was a more profound realization in 1959 than it is now, but it is worth pointing out.  “In Consumer’s Digest they’re always telling you to watch out for frauds and misleading advertising; you know, short weight and that sort of thing. Maybe this magazine, this publicity about this Marilyn Monroe, is all just a big bunch of hot air.  They’re trying to build up some trivial starlet, pretend everybody has heard of her, so when people hear about her for the first time they’ll say.  Oh yes, that famous actress.  Personally I don’t think she’s much more than a glandular case.” 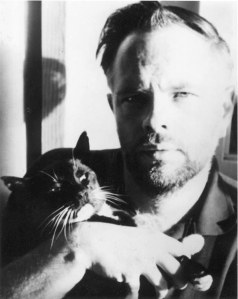 Exploration
This is not the first Dick novel to explore the conflict between the human spirit’s desire for exploration and new frontiers and the desire of the state to restrict expansion.  In The World Jones Made, the effort to restrain expansion to other systems is a major theme.  In The Crack in Space, the solution to the Malthusian crisis was human expansion but it was never seen as politically non-controversial.  In many of his works, the human settlement on other planets are tools of institutional oppression (Clans of the Alphane Moon) or consciously made crappy (Martian Time Slip).  A lot of energy was put into making expansion undesirable.

At this point, it is good to recall Frederick Jackson Turner.  As a Westerner for most of his life, Dick lived the end of the frontier.  I have no doubt that the transformation of the American frontier into suburban desolation influenced his view of extraterrestrial settlement.  I have a feeling that he is a follower of Turner in at least one area.  He seems to think human freedom requires the physical relocation outside of our comfort zone.  In the historian Turner’s view, the frontier was the crucible of American democracy.  For Dick, the decadence of Earth will lead to authoritarianism unless we can freely settle into new areas.  This tension plays its self out in many of his works but is rarely spoken of.  I will point it out in future posts.