The second half of In the Midst of Life is a bit more difficult to come to terms with because its themes are more opaque.  The first fifteen stories considered the lives of soldiers in the Civil War and suggested Bierce’s quite modern (almost 20th century) view of warfare as indiscriminate and fundamentally at odds with a republic based on the elevation of individuals due to talent.  The second half – “Civilians” – puts people in no less extraordinary situations.  We get the same feeling that there is a thin line between the extraordinary and the banal.  Criminals are hung, marriages are strained, wills are enforced, and people go mad.  This is all the everyday happenings in a society, but Bierce masterfully presents these events are bizarre, almost supernatural happenings.  It almost makes us wonder how extraordinary our own lives are. 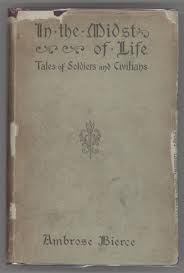 We also find men and women capable of transcending existing reality.  A writer in “The Suitable Surroundings” suggests the ability of literature of doing this.  The writer justifies his demand for the reader’s absolute attention as follows.  “To deny him this is immoral.  to make him share your attention with the rattle of a street car, the moving panorama of the crowds on the sidewalks, and the buildings beyond — with any of the thousands of distractions which make our customary environment — is to treat him with gross injustice.” (184)  The eleven stories that make up the second half of In the Midst of Life are full of characters who actively refuse to accept the world as it is.  Yes, their situations are often banal but as we learned in the stories about soldiers, we do not experience grand events.  Even when part of what will be larger remembered grandly (a Civil War battle for instance) our experiences are downright commonplace.  The ability to refuse existing reality is an important skill as we search for alternatives, but we do not need to be imagining alternative systems.  Often shaking our mundane lives by refusing to accept the hand we have been dealt is enough.  For instance, in “The Famous Gilson Bequest” a condemned thief leaves in his will a provision that his fortune (which turned out to be sizable) will go to the man that can provide his guilt, otherwise the wealth will go to his lawyer.  Through this simple act – a poorly-written will – a simple criminal challenged the legal system and in effect controlled the future destiny of his lawyer.  In “A Holy Terror” the protagonist goes West to hunt for gold, which he believes exists in a liquid state.  In the process he abandons his family and eventually resorts to grave robbing. 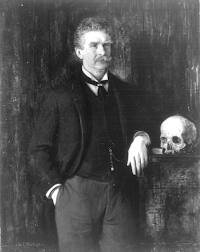 More troubling is the many characters in these stories who are bound or trapped by their situations.  The most extreme example of this is in “The Man and the Snake,” where a bookish fellow is horrified at the presence of a snake in his room.  He dies of fright, but as it turns out the snake was merely a stuffed specimen, “its eyes were two shoe buttons.” (166)  In more run of the mill examples, people are trapped by the state, marriage, or their own personalities.  In “The Boarded Window” an Ohio frontiersman is unable to save his wife from a fever but is also unable to grieve.  “He had had no experience in grief, his capacity had not been enlarged by use.  his heart could not contain it all, nor his imagination rightly conceive it.” (191)  Another man, incapable of admitting his adultery spends years in prison for burglary.  When he later meets his former lover, she falls out of her window in a mad effort to reach out to him.  The narrator reminds us that although she was capable of breaking the divine law of God against adultery she could not break the natural law of gravity. (“The Man out of the Nose”)  In the same way that the line between the extraordinary and the banal is subtle and depends on your perspective, the line between freedom and confinement is vague at best.

Perhaps due to his 1888 separation from his wife over concerns about her infidelity, Bierce’s stories from this 1890s seems to suggest a profound ambivalence about marriage.  The relationships we see in these stories are often shallow, existing in name only, shattered by adultery, or simply bizarre.  He even used one character’s lack of knowledge about snake species to throw out “a man who ascertains after marriage that his wife does not know Greek, is entitled to a divorce.”  (165)  More brutal is “An Adventure of Brownville” which involves the narrator observing the violence within another family after overhearing a conversation.  In attempts to intervene to the wife after her sister died under suspicious circumstances.  The wife eventually finds escape only in suicide, which had no affect on her husband who treated her death with legalistic abstraction.  He strolled from his wife’s body singing “La donna e mobile.”

Bierce is decidedly misanthropic and often pessimistic, but there are brief windows of optimism in his work.  Not only does he embrace characters who are capable of acts of goodness and conscious in the face of systems or individuals that are clearly psychopathic.  More importantly, he sometimes shows that is possible to transcend the traps fate lays for us.  As with prisoners, escape may be all but impossible but that does not relieve of us the obligation to attempt escape.  Our first step, and the one Bierce embraces, is to step away from the gigantism of the era.  Compared to the soldiers, the civilians had options to escape the indiscriminate violence and enforced indifference.