One does not need to read as much Philip K. Dick as I have been to realize that he thinks that the trajectory of late capitalism leads the vast majority of us toward mental illness.  This is not necessarily a problem if mental illness is integral to the functioning of the system.  If that is the case, it will be those few of us without personality disorders that will be out of place, confused and incapable of functioning.  In world in which we have the capacity to destroy the entire planet, when we rush headlong into ecological devastation without the least anxiety or change to our everyday life, where wealth expands and inequality expands, and where democracy seems to inexorably expand but none of us feel more free in our daily lives, is clearly insane.  Clans of the Alphane Moon is Philip K. Dick’s attempt to prove to the reader that mental illness is in fact integral to how we organize society. 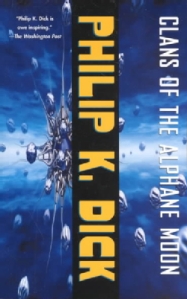 Adam Kotsko’s Why We Love Sociopaths: A Guide to Late Capitalist Television seems to argue that we are attracted to sociopathic characters, which are legion in contemporary American television (Walter White, Stringer Bell, Tony Soprano, most of the villains in Spartacus), because we see in them the ability to navigate this bizarre and amoral world in ways that those of us still clinging to social convention lack.  Dick’s use of mental illness in nearly all of his major novels and his common use of psychotherapy as a plot device (Dr. Bloodmoney) suggests that this theme was heavy on his mind.

The protagonist of The Clans of the Alphane Moon, Chuck Rittersdorf, is a CIA agent, but in fact he is a teller of lies.  He is a skilled writer who makes his modest living (made more modest by yet another PKD succubus, his ex-wife Mary Rittersdorf) by writing for simulacra that are sent to communist countries to spread pro-US propaganda.  Posting as average citizens, these robots are quite successful, but they need excellent scripting and programming.  Chuck’s job is to be convincing enough that the targets do not realize they are talking to an instrument of propaganda.  Mary takes a job working on securing the Terran claim to a moon in the Alpane system populated by the descendents of escaped mental patients.  Chuck takes a second job (made possible with the use of stimulants, much like PKD himself who wrote almost a dozen books in the mid-1960s) writing for a comedian Benny Hentman.  Hentman is a supporter of the Alphane claims on the moon.  These developments places Chuck in a prime position to attempt an assassination of his wife.  In fact, their near-death experiences seem to bring them closer together.  The heart of the novel, however, is the clans and their capacity to create a functioning society based on mental illness.  We might say that the denziens of Alpha III M2 are more honest than we are about the requirement of insanity for late capitalism.

There are seven tribes, each with a representative, a typical mental illness (some show signs of more than one category), a settlement, and a function in the society.  Certainly any one of these tribes alone would collapse easily.  But as a group, they actually did quite well before invaded by Earthlings.  We have much to learn about this elegant division of labor.  Some are already pointing this out.  Paul Baibak and Robert Hare argue in Snakes in Suits: When Psychopaths Go to Work that those most capable of rising up the ladder in the amoral world of the postmodern corporation are psychopaths.  Their book provides practical advice to dealing with this cruel reality.  We could extend this to many professions.  Perhaps there is a degree of infantilism required of being a grade school teacher.  Schizophrenia or delusions of grandeur would certainly help if you wanted to be Pope or start a cult.

On Alpha III M2, the manics are called the Manes.  They live in a settlement named after Leonardo da Vinci and are responsible for creating warriors and technological developments (although their efforts are often cut short by their over enthusiasm).  Hebrephrenia (I had to look this one up a few weeks ago- it is disorganized schizophrenia) are the working class and provide some religious inspiration and are called Heebs.  They live in Gandhitown.  The Polys are the the creative class, suffering from polymorphic schizophrenia (what the hell is that?) and live in a town named after Hamlet.  The vanilla schizophrenics are callde Skitzes and live in Joan d’Arc town, living out lives as writers and poets. The ruling class come from the Pares clan, live in Adolfville, and are responsible for defense.  Finally are the Ob-Coms (obsessive-compluslive) and Deps (depression).  Despite mutual distrust and often hatred they seem to make it work.  See, it does not require that one likes another functionary in order to make use of them.  Everyone sees the Heebs are smelly and degenerate, but they provide crucial working class needs.  Of course, we might be repulsed by a obsessive-compulsive’s habits but realize that they make good bureaucrats. Everyone fears the Manes and laughs at the child-like character of the Polys.  It is not a utopia at all.  It is a rather accurate, if exaggerated look at our own division of labor.  In Chapter Seven, Mary hands us this interpretation when providing her own description of the social functions of the various tribes.

This is one of Dick’s most humorous novels.  Chuck moves into a bachelor apartment complex and is helped in by a host of non-Terrans, including the memorable Lord Running Clam – a slime old from Ganymede with psychic powers. The dynamics between the different clans are full of comedic value.   It is novels like that convince me that Hollywood takes PKD way to seriously in their adaptations.

Imagine this guy talking to you.